The training that 243 Ogopogo Cadets receive is not restricted to only Mandatory Training Nights, rather much of the training that occurs takes place on other weeknights. The amount of effort put in by the individual cadet is in direct relation to what they get out of the program upon graduation.

Please check the squadron calendar for any up to date timings or changes to any of the activities listed below. 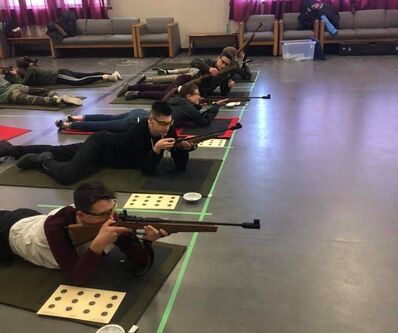 Marksmanship  (Air Rifle Precision Shooting)
​The Cadet Marksmanship Program is a challenging and competitive sports program accessible to all cadets. It develops skills through superior training and Olympic-style competition.

Cadets have the opportunity to participate in a series of competitions at the local level that culminate in provincial competitions and an annual National Cadet Marksmanship Championship.

Marksmanship training is available at the squadron and practices can be found on the squadron calendar. Speak to Capt Nobakht to learn how to join the team! 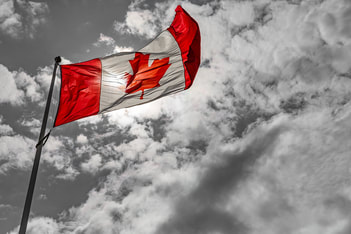 Flag Party  (Flag & Rifle Drill)
The Flag Party has become a symbol for each unit, and bears the distinctive honour of carrying the unit’s colours. Because of its historic role, the Flag Party is the only section with members that carry rifles.

Born in the imperial era of modern history, the Flag Party has been inherited from British military tradition. In pre-modern wars, it was often difficult for army commanders to distinguish between friendly and enemy forces on the battlefield. The solution to this problem was to create identifying colours for each army. Over time, this centralized identifier became the rallying point for the forces on the the field. In order to protect the colours, each unit created a guard for its flags. The Flag Party of 243 Ogopogo is a hard working team that participates in many special events. To be part of the Flag Party, it takes a dedicated team player who has a desire to hone their self-discipline, confidence, stamina, drill, and leadership potential.

The flight’s mission is to be the most elite group of cadets in the squadron. We strive for excellence; our drill, dress and deportment are above the squadron standards. You will learn how to work as a team to produce a brilliant show of sharp drill while carrying either a rifle or a flag. You will receive specialized one-on-one training in rifle drill, flag drill, and leadership.

With the Flag Party, you will set the highest of standards; you will look smart in both dress and deportment, have a smart attitude, show leadership, and move with purpose to produce sharp and strong drill!

Band
After receiving instruction support from the leadership of 93 Grenville Sea Cadets, the multi-unit Marching Band was formed in 2017. The band is open to all cadets regardless of experience. The band regularly performs at community events, the various Annual Ceremonial Reviews, and public ceremonies and parades. Cadet band members have also attended performances by CAF Regimental bands in order to gain an appreciation of the Canadian military musical history and tradition.

Cadets are encouraged to attend the yearly training sessions and workshops hosted by Region to increase their knowledge and level of understanding with their instrument. At these training sessions, Cadets can write theory exams and complete practical assessments to obtain their music proficiency levels.

This music program forms part of the Optional Training for cadets and provides very high-caliber musical training at no cost to parents. This exceptional training compliments music education provided at schools and is invaluable for any young musician considering pursuing music for pleasure or as a career. 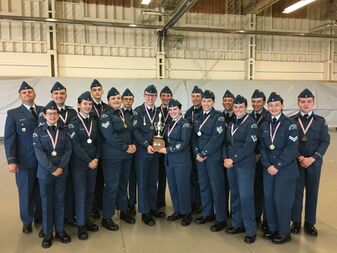 Drill Team
Would you like to shake the ground like thunder? Command attention with a simple turn? Amaze crowds without saying a word? Then 243 Ogopogo Drill Team is the place for you, no matter your starting ability.

Drill has always been a crucial part of the cadet program and the most obvious element that distinguishes us from other youth organizations. In learning drill skills, cadets will develop self-confidence, self-discipline, and most importantly, teamwork; all skills also crucial outside of cadets.

243 Ogopogo's Drill Team will enable cadets to further refine and advance their drill while hand-in-hand further evolving their mental and physical capabilities. The Drill Team is a group of 16 or more cadets led by a selected Team Commander and a Drill Team Officer. Drill team members are part of an exclusive team within the squadron. As such, dedication and commitment is essential, with an eagerness to always advance. Team members will be held to the highest standard of drill, dress, and deportment as they will be examples of 243's elite in the public eye.

Drill Team Cadets from various training levels conduct a multitude of drill movements ranging from basic to advance levels. The 243 Ogopogo Drill Team practices their demonstrations throughout the year at different events and competes at various local, zone, regional, and national competitions. For the competition members will practice a voice (compulsory) and silent drill routine.

Congratulations to last year's 243 Ogopogo Precision Drill Team for their achievement as 2019 Zone Champions, lead by WO1 Butler, who was crowned Top Drill Team Commander.

If you’d like to join this team – and everyone is welcome – listen for announcements about practices at final parade or look on the Squadron calendar. 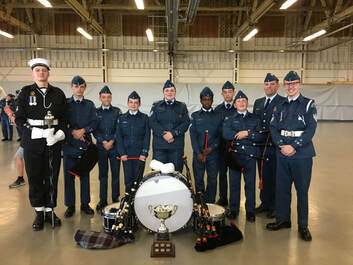 Pipes & Drums
The Great Highland Bagpipe (aka bagpipes or pipes) is likely the most revered instrument.  Starting on a practice chanter, cadet pipers learn the famous slow air Amazing Grace, the crowd-favorite march Scotland the Brave, and more advanced tunes (not songs) such as Strathspeys, Reels, Jigs, and even Piobaireachds.  Bagpipes are accompanied by the beat of a bass drum, the roll of highland snare drums, and the aesthetic flourishing on tenor drums.  Cadet drummers start learning rhythms on sticks & pads, but soon compete with bagpipes for the loudest instrument...  Together, they are a harmonic ensemble!

243 Ogopogo Air Cadet Squadron has partnered with the local units of 93 Grenville Sea Cadet Corps, 903 BCDs Army Cadet Corps, and 909 Peregrine Air Cadet Squadron to form the Okanagan Cadet Pipes & Drums.  We meet weekly on Tuesday nights (6:30-7pm for beginners, 7-8:30pm for others) from September to June, and monthly on Sundays, providing free instruction on bagpipes and drums.

Instruments are lent at first.  As soon as cadets are accomplished enough on their practice instruments (practice chanters/sticks/pads), they receive bagpipes or drums.  Dedicated cadets are encouraged to purchase their own practice chanters/bagpipes or sticks/pads, which they could keep playing for many years, perhaps as a hobby or even as a member of a community and/or competitive pipe band.

The program lives strong, thanks to piping instructors, Capt Arnold & CI Watt, to the drumming instructor, CI Wraith, and to other partnering instructors, with access to a cadet music clinic and cadet summer training courses.  In 2019, we represented all BC by winning the trophy for Top Junior Cadet Pipe Band.  Congrats to WO Conway S. for being selected on the Honor Band, and to Cpl Yaworsky & Cpl Neupert for being selected respectively Top Basic Piper & Top Basic Snare Drummer this past summer!
Aviation Club
For those younger Cadets not eligible for writing their Glider or Power Pilot exam, they have a chance to learn about aviation topics in a fun setting by building radio controlled planes to fly, building and setting off rockets, and learning the laws of flight in a flight simulator. Check out the Squadron Calendar for activity dates and times!
Ground School
The squadron provides  ground school for those cadets who are interested (and eligible) in pursuing a flying course within the Air Cadet Gliding and Power Pilot Program. Annual scholarships for Glider and Power Pilot courses are available, and both are covered within the syllabus.

The course is based on the content of “From the Ground Up”. Cadets are encouraged to read the topics covered in class on their own to strengthen their knowledge base.

The course finishes with mock exams, followed by preparation for the provincial qualification exam. After the qualification exam, cadet are prepped for their Scholarship Board interview. The interviews are held and successful candidates are moved forward for potential selection as a Glider Pilot or Power Pilot recipient. 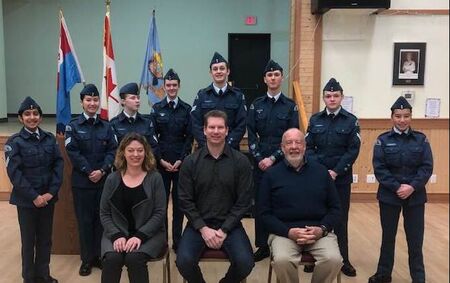 Effective Speaking
The Effective Speaking (ES) program provides opportunity for Air Cadets to find their voice and build self-confidence through practice, instruction, and competition.  Annually, top speakers at the squadron level compete at the regional ES competition.  During the provincial ES competition, the top regional speakers deliver prepared speeches and most excitingly, speak off-the-cuff on topics they have been provided with limited time to write a speech.
Other activities not listed above include the Duke of Edinburgh Program & the monthly Senior NCO meeting (Sgt+) to discuss upcoming events, standards, and comradery.